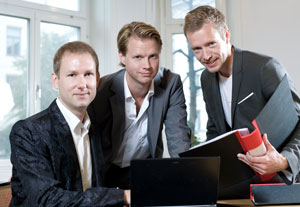 Intelligent whilst also good-looking? Yes, we’re afraid that is the truth! That is to say that Mr Green was developed in the minds of three good-looking gentlemen: Fredrik Sidfalk, Mikael Pawlo und Henrik Bergquist.

Fredrik, Mikael and Henrik come from Landsnora in Sollentuna, in the north of Sweden, where they spent their childhood together. Their friendship began on the schoolyard. As they matured, their friendship also developed through lively discussions over good coffee. It was during one of those discussions that the idea for Mr Green was born. Gaming & PR
Fredrik’s and Henrik’s long years of experience in the field of gaming and Mikael’s vast knowledge of PR soon made Mr Green a reality. When Mr Green was first launched, it became successful so quickly that Internet World awarded if for being the best online casino and the best gaming site.

However, the website did not fulfil the expectations of the founding-team, as it only featured 30 % of the previously planned functions. They all agreed: The site needed more work. An intense developing phase followed and the second version of Mr Green was launched in December 2008. The website now had a completely new look along with 100 new games. 2009 then brought an improvement in graphics and an additional 100 games. Mr Green made it into Internet World’s Top 100 list once again and was awarded for Best Gaming Company, Highest Rated Online Casino and Best Website in Sweden. Various improvements
The development still continued and in August 2010 the third version of the Mr Green online casino was launched. Along with various improvements, new methods of payment were introduced to fully optimize the pay-out process. For the third time in a row, Mr Green won the award for Highest Rated Online Casino. He narrowly missed the Award for Best Gaming Company, but that was only an incentive to work even harder at becoming the best. And it worked. 2011 the title returned to whom it rightly belonged – Mr Green.

The right order was restored. But don’t think that Mr Green rested on his laurels. Improvement of the gaming experience continued and a refined version of the website with a new layout was presented in October 2011. 2012 a mobile version was added and improvement still continues. Be excited, for what the future holds! Wide range of Entertainment
What distinguishes Mr Green from other online casinos? Mr Green focuses primarily on the enjoyment that comes from gaming and entertainment. Whether you are someone who wants to win big or are just there to have some fun, Mr Green offers a wide range of games for everyone that will entertain and inspire you. He is always on the lookout for new, exciting games, but don’t worry, you will always be able to find your favourite games on the website too. Lastly, Mr Green knows that taking risks is fun, as long as it’sin moderation. That’s why he created Green Gaming. This gives you the option to play with pre-set limits, so nothing stands in the way of enjoying carefree and exciting games on www.mrgreen.com

Mr Green’s headquarters are in Malta, where the company is licensed and registered. The managementenjoys the sunny island, along with the customer service and other employees.

Who is Mr Green?